Tell me about PoE

Power over Ethernet (PoE) is a technique for delivering DC power to devices over copper Ethernet cabling, eliminating the need for separate power supplies and GPOs. While PoE doesn’t add Ethernet data capabilities, it does offer expanded options for how and where Ethernet end devices such as phones, cameras and WiFi access points can be placed.

Cisco developed and first delivered a proprietary version of PoE in 2000, to enable scalable and manageable power delivery to Cisco IP-telephony handsets.

In 1999, both the IEEE and the Ethernet Alliance started working to standardise PoE to ensure interoperability across a broader range of connected powered devices and power sourcing equipment. The first of these standards, IEEE 802.3af, was ratified in 2003 and specified that the power must be able to be carried by either spare pairs (pins 4 and 5 or pins 7 and 8) or data pairs (pins 1 and 2 or pins 3 and 6).

The standard also includes a mechanism to protect devices that do not support PoE: A 25-kohm resistor is added between the power pairs on the powered device, and the power source provides power only if something close to that resistive value is detected. 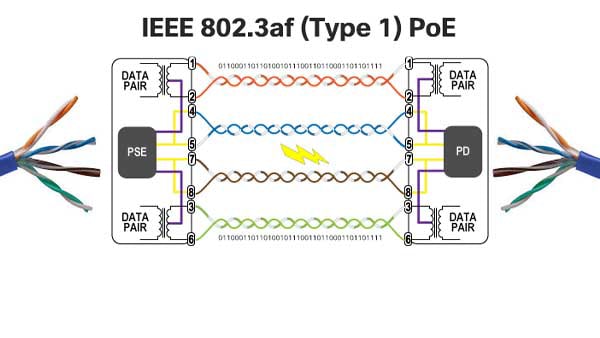 The value of PoE was quickly realised. Transporting both power and data across a single cable not only reduced cabling needs but improved safety and simplified installation, thus saving time and reducing cost. The value of PoE in turn amplified the need for more power to support a wider variety of end devices, resulting in several additions and improvements to the 802.3af standard. 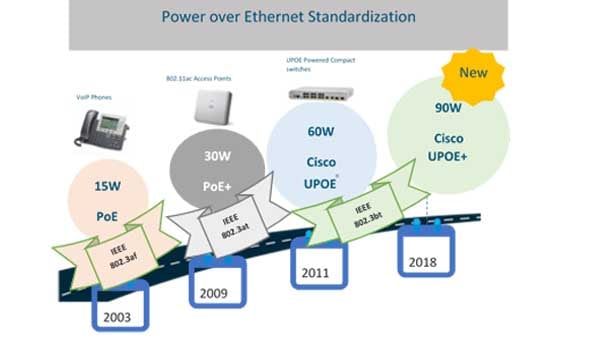 IEEE 802.3at, known as PoE+ or Type 2, was ratified in 2009 and increased power to 30W opening up new capabilities for endpoints. In 2011, Cisco pioneered 60W Cisco Universal Power Over Ethernet (UPOE), leveraging all four twisted pairs and leading to the IEEE 802.3bt standard defining 4PPoE Type 3. In 2018, the 802.3bt standard was amended to increase the maximum power to 90W from the power source known as 4PPoE Type 4.

Each new standard provides for backward compatibility with all previous standards and notes the minimum power per port to be supplied to the powered devices. This minimum requirement accounts for power loss over the length of the cable, with a maximum length set at 100m.

With each power increase, cabling requirements also increased, with Cat 5 cabling being the minimum requirement for Type 3 (60W) and Type 4 (90W) PoE.

While PoE has been a staple in offices worldwide, 90W PoE opens the door to a new world of options, powering devices ranging from LED lighting, kiosks, occupancy sensors, alarm systems, and cameras to monitors, window shades, USB-C-capable laptops, and even air conditioners and refrigerators.

USB-C-capable laptops will likely be the biggest game changer, since the ability to eliminate the traditional “power brick” will delight end users and pave the way for a “single cable” workspace, where one cable powers the desk phone, lamp, monitor, and laptop.

It’s almost certain that 90W PoE will also herald major changes for smart-building and industrial applications. The combination of data and power in one Ethernet cable will accelerate the already rapid transition to Ethernet-based industrial control systems as well as the consolidation of traditionally separate operational technology (OT) (such as HVAC, lighting, and security/alarming) with IT-managed devices (IP phones, printers, computers, etc.).

WHAT ARE THE BENEFITS OF POE?

Using Power over Ethernet provides a number of advantages during installation:

PoE can reduce the time and expense of having electrical power cabling installed. Network cables do not require a qualified electrician to install. Reduction of power outlets required per installed device saves money. It also reduces energy costs by allowing for centralized control over lighting, window shades, and heating and cooling.

Without being tethered to electrical outlets, devices such as monitors, security cameras, and wireless access points can be positioned in ideal locations and be easily repositioned if moved.

Power delivery using PoE is designed to intelligently protect network equipment from overload, underpowering, and incorrect installation. It also eliminates the danger of working with or around dangerous high-voltage power sources.

PoE power comes from a central and universally compatible source and not from a collection of distributed wall adapters. It can be backed up by an uninterruptible power supply (UPS), allowing for continuous operation even during power failures. PoE also allows for devices to be easily disabled or reset from a centralized controller.

Having power available on the network means that the installation and distribution of network connections are simple and effective.

If you need assistance with providing PoE for your existing or new installation, contact us.

To compliment their range of high-performance, cloud-managed wireless access points, Cambium Networks have introduced a range of cnMatrix network switches….