Power interruptions caused by storms or otherwise can strike without warning so what will happen to your phone system, your servers, storage arrays and PC’s in the event of a power failure, or worse, a lightning strike?

Sudden power failures or surges can cause havoc with sensitive electronic equipment or data loss.

Surge protection can help with surges but in the event of a sag or complete failure, simple surge protection won’t help so the answer is an Uninterruptible Power Supply (UPS).

There are three main topologies used in UPS’s made today and these are detailed below. 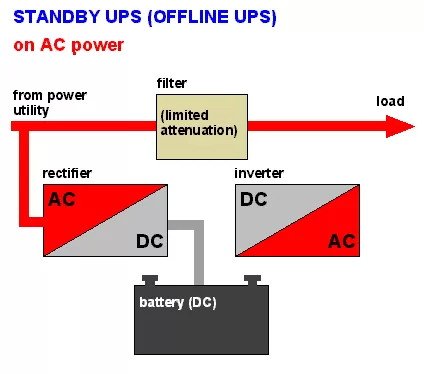 The simplest type of UPS is the Standby topology. Under normal operating conditions, mains AC power passes straight through the UPS to the critical load maybe with some surge protection. A charger converts mains AC power to DC to charge the battery. In the event of a mains failure, the inverter is used to convert the DC power from the battery to create AC power to support the load.

The Standby UPS can be made very inexpensively, and the efficiency is very high in normal operation as only a small amount of power is being converted from AC to DC to maintain battery charge. When the mains AC power goes out of specification, there is a power disturbance in the output voltage as the power failure is detected, the transfer relay operates, and the output inverter turns on to begin supplying the load by converting the DC power to AC to support the load.

The Standby UPS is normally only used with least critical loads and typically where purchase price plays a significant determining factor for the consumer, such as with domestic PC´s. They rely on the hold-up time of the power supply in the PC being greater than the switching time of the transfer relay in the UPS.

Examples of Standby UPS’s are the APC BackUPS, Eaton 3S and CyberPower BRIC. The Line-Interactive UPS is similar in operation to a Standby UPS, but with the addition of a multi-tap variable-voltage autotransformer. This ‘buck and boost’ functionality allows the UPS to continue providing power to the critical load during extended under-voltage and over-voltage periods without drawing power from the DC Battery. It achieves this by converting mains AC power that is too high or too low to an acceptable level by adjusting the ratio of the autotransformer.

For example if the input voltage rises to 260 volts, the UPS will sense this and adjust the autotransformer from the default ratio of 1:1 to a reduction ratio of 1.1:1 giving an output voltage of approximately 236 volts which is much closer to the nominal 240 volts.

Under mains AC failure conditions the Line-Interactive UPS operates in a very similar fashion to the Standby UPS, however the inherent electrical characteristics of the autotransformer results in a ride-through affect that reduces the length of the interruption between mains AC failure and the inverter supporting the load.

Line-Interactive products are more expensive than Standby UPS due to the increased complexity; however efficiency is slightly less due to the additional power conditioning functions. Line-Interactive UPS such as the standard APC Smart-UPS are probably the most common UPS under 3kVA protecting non-domestic critical loads. 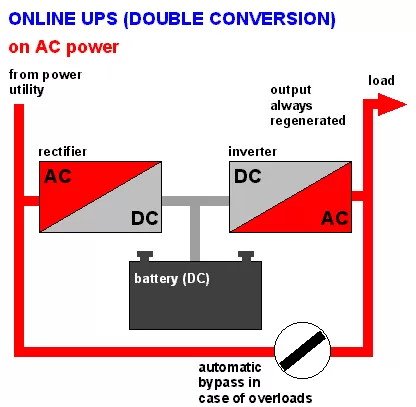 The Double-Conversion UPS is considered the premium topology. Under normal operating conditions the mains AC power is constantly being converted to DC by the Rectifier to supply the ‘DC Bus’ and Battery. The DC is then converted back to AC power by the Inverter to supply the load. In the event of a mains AC failure the Rectifier can no longer supply DC to the DC Bus and Battery however the Inverter continues to supply AC to the critical load without interruption as the Battery continues to provide DC for conversion. The critical load is supplied with extremely clean power regardless of what noise or other impairments are on the input so they are specified for use with medical equipment.

This Double-Conversion (AC -> DC -> AC) results in lower system efficiency and greater internal heat generation that generally requires the use of cooling fans running continuously to dissipate. The price that is paid for efficiency however is repaid in increased protection for the critical load. The Double-Conversion UPS not only protects against outages and long-term voltage variations, it also provides an electrical barrier between the mains AC power and the critical load by filtering out noise, spikes, and short duration voltage variations known as sags and swells. Double-Conversion UPS are virtually the industry standard for applications over 3kVA.

For best possible protection of your equipment we recommend using a double conversion UPS for areas outside the main centres.

For the home theatre enthusiast, a UPS on your projector is cheap insurance to provide a few minutes of power to allow your the bulb to cool off in the event of a power failure but if you are concerned about your BluRay player, receiver or projector picking up noise from the power then the ultimate protection is a double conversion UPS. Far better than an overpriced power conditioner.

Contact us to discuss an Uninterruptible Power Supply to suit your needs.